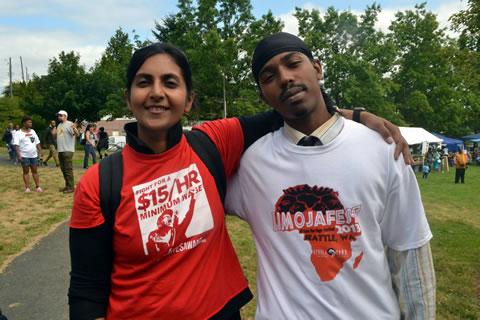 In the final days of the Seattle council election Kshama Sawant was losing by a small margin of votes. Seattle rap cult-hero “SIC ILL” felt sympathy for her causes, one of which is to have the city of Seattle have a $15 minimum wage standard.

SIC ILL met Sawant in the summer of 2013 as she was campaigning at the annual UmojaFest Ethnic Heritage event in Judkins Park. He was volunteering as stage security for the Zulu Nation Seattle chapter and after Sawant’s speech he approached her for a photo opt and pledged to help her if he could.

SIC’s influence would prove invaluable as he relentlessly tweeted to over 100,000 local area followers from multiple Twitter accounts in the final days of the election.

The next day after SIC ILL’s help the Seattle Times reported that Kshama gained an unexpected lead. Shortly afterwards she would oust the incumbent and become Seattle’s first socialist elect.

The nation is still looking to tap into what it was that shifted political balance, but people in Seattle know. With an entertainment and political influence, SIC is in rare territory with Arnold Schwarzenegger and Ronald Reagen.

Be sure to watch Seattle rapper SIC ILL’s latest viral video “FAST N HOT” and add to the 100,000s of views, so maybe his influence can alter another election.